The clock is ticking for Ukrainians who came to America under a program called United for Ukraine – or U 4 U. Victor Selepina of the Ukrainian Pentecostal Church in Lexington is in the process of sponsoring two families under U 4 U, which would allow them to stay in the U.S. for two years. He said his church has been doing the same for more than 100.

U-4-U was designed to be a temporary program and requires that people, or organizations, sponsor them financially.

“They’re all hoping that they’re either going to be able extend it or they can sort of refile or resubmit it to a permanent stay here in the United States, which is probably the latter case – most of the families, they do want to stay here.”

Selepina said one Ukrainian family already here is split – the children want to go home one day, and the parents want to stay here.

**In a sea of partisan news, WEKU is your source for public service, fact-based journalism. Monthly sustaining donors are the top source of funding for this growing nonprofit news organization. Please join others in your community who support WEKU by making your donation. 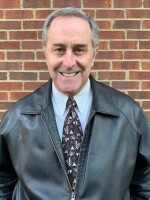 John McGary
John McGary is a Lexington native and Navy veteran with three decades of radio, television and newspaper experience.
See stories by John McGary
Support nonprofit, fact-based public service journalism
WEKU depends on support from those who view and listen to our content. There's no paywall here. Please support WEKU with your donation.
Contribute now